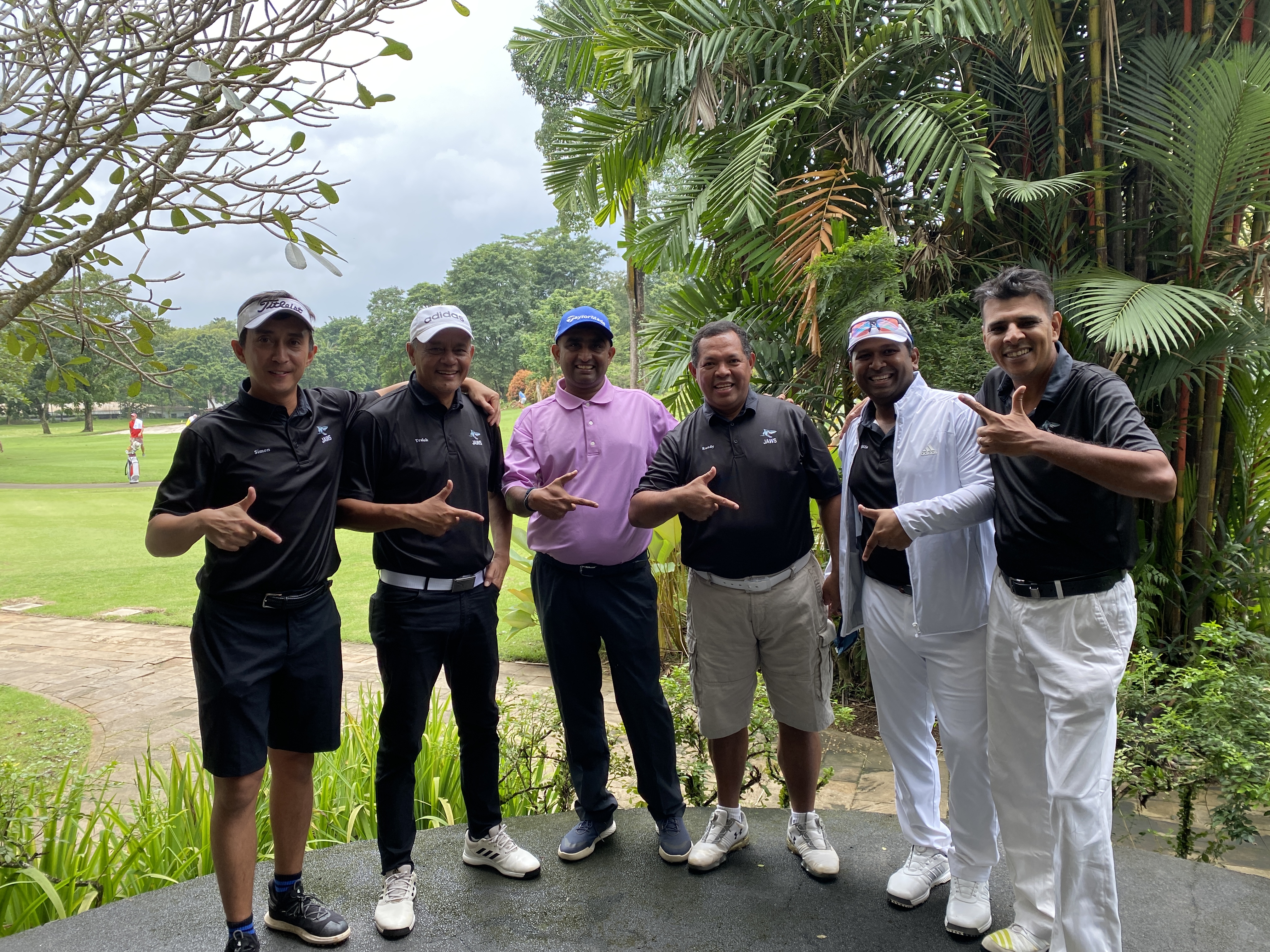 The JAWS INTER LEAGUE team is ready for 2021 and we look forward to the camaraderie, the fun , friendships , challenges and the competition between all of us.

This Sunday, on the 21st February 2021,  was a historic day for the JAWS Golf Community, as 8 JAWS players went into battle for the opening round of the Jakarta Inter league 2021 (Inter-Society) Matchplay Competition

This unique format allows teams of 8 golfers to compete ‘On handicap’ against opposing societies in 5 matches per round: 2 singles, 3 doubles (fourball-bestball) with 2 points for a win, 1 point for a draw and a maximum of 10 points per fixture. Traditionally each society must field atleast 2 of its 3 lowest handicap players in the ‘Singles’, and the remaining squad players battle it out in the doubles (fourballs). This 2021 season consists of a total of 7 Golf Societies competing having had one team withdraw, as the league welcomes two additional teams into the fray and competition: JAWS and Jakarta DOGS.

As the new season begun, all eyes were on the two new teams, with JAWS player Simon Reynolds Captaining the side and flying the JAWS Flag from the front in the singles with fellow shark and vice-captain Gaurav Shirke. With a Round 1 performance of 6 points: 2 wins, 2 draws and 1 loss, the JAWS team is quietly confident and content as they prop up the top 3 in third place, within biting distance of the leaders and newcomer’s to the league Jakarta DOGS. Hats off to Captain Simon for battling with Riverside GM Peng Siong for a 4 & 3 to gain revenge for the 2 & 1 defeat in the same fixture last season.

The rest of the team lined up and performed admirably as follows:

With 6 remaining fixtures, and round 2 only a few weeks ahead on March 14th at Riverside… Captain and Vice Gaurav are feeling quietly confident backed up by their deep squad of 18 JAWS players, at the same time optimistic and proud to see the team spirit growing and bubbling with positive energy moving forward as they prepare and keep practicing in time for Round 2.

What is the Inter League?

The Jakarta Inter-league is played each year, perhaps unsurprisingly, in a league format, with each team playing all the other teams on an approximately monthly basis from February or March until November with a 2 month break in July and August, coinciding with the time when many take their long family holidays.

Each team comprises 8 players with each match consisting of 2 singles and 3 Four Ball games in matchplay format. Scoring is 2 points for a win, 1 for a draw and SFA for a loss so there are 10 points available in match; all scores count towards the final league table which is based on total points won rather than individual match results. Obviously, the team with the most points at the end of the season gets to celebrate taking home the trophy and, as importantly, a year of bragging rights.

Riverside Golf Club is a stunning and dramatic golf course with a 18-hole par 72 championship course set along the Cikeas River within the beautiful province of Bogor, Indonesia. Designed by golf legend and great white shark Greg Norman, the 90 hectare site offers players of all levels an adrenaline-charged ride in a setting of lush natural greenery.